Once complete, 960 W 7th Street in Los Angeles (LA) will consist of a 56-story tower comprising approximately 780 residences, indoor and outdoor amenity spaces, above- and below-grade parking, and retail.

​Construction began mid-June 2019 and is ongoing with a scheduled completion of 2022. Given the tight space constraints and to provide easier access to this urban site, Brierley designed a temporary equipment trestle for Malcolm Drilling, https://malcolmintl.com/our-work/7th-street/  who is a subcontractor for Webcor, the General Contractor (GC).

The trestle was relatively large, with 8720 SF of main deck plus 630 SF of pedestrian deck that was cantilevered off north end of the trestle. It was 136 feet by 84 feet maximum in plan view and about 60 feet deep to grade from street level at the trestle location. We set the main girders north-south in 5 girder lines (I to V) at varying spaces (9.5 feet to 24 feet) so that the heavy construction equipment would load the girders directly. We set the four lateral, east-west framing bents (R to U) on piles at 40-foot centers, with the south end span (Q to R) to the skewed 8th Street soldier pile line with spans between approximately 10 and 17 feet.

Nine of the 15 girders were 40-foot span Omega Beams, which are described in the trestle article entitled Deep Foundations Pose Challenges in Tight Downtown Areas in the March 2020 issue of In Depth. Longitudinal (north-south) 12×12 inch timber mats spanned 10 feet maximum between W14X109 transverse (east-west) floorbeams, which in turn were supported by the main girders on 10 foot to 40 foot spans. The Omega beam girders were supported directly on the pipe piles and the wide flange (W14 or W36) girders required cap beams.

We attached the trestle to the south end shoring wall along 8th Street but had to brace two of the pile-supported transverse bents with diagonal tee bracing (WT7). The main difficulties in the trestle design were the numerous obstructions that had to be avoided, including shoring elements, primary footings, columns and walls, two tower cranes, and a manlift. Numerous iterations were needed. At this writing the construction has reached ground level and most of the trestle has been removed, with about 2100 SF of the southwest section of the trestle remaining in place.

David Berti is a registered Professional Engineer and Structural Engineer in California. He has nearly 50 years of experience designing efficient and practical temporary and permanent structures for heavy construction. 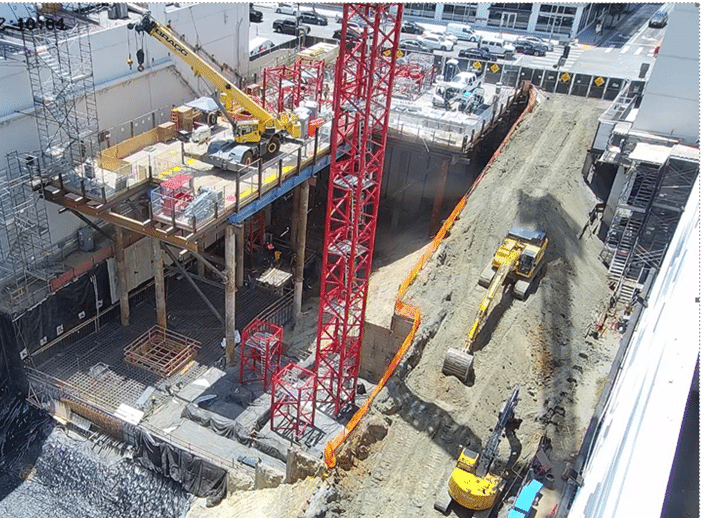 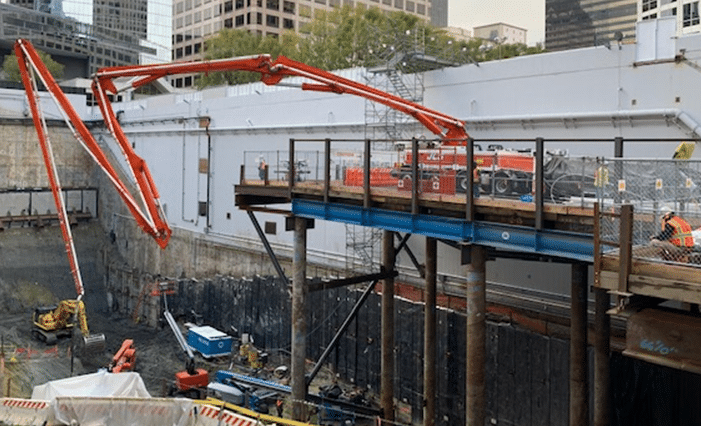